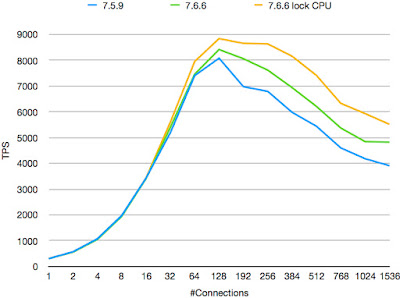 In MySQL Cluster 7.6 we introduced a new thread type in the NDB API.
Traditionally each cluster connection has one send thread to assist in sending messages to NDB, a receive thread that can
assist in receiving messages from NDB.
There is also a connection thread that listens to new connections and connects to the NDB data nodes.

There is also a set of user threads that is created by the application
that uses the NDB cluster connection.

Most of the sending is done by the user threads, the NDB API sending
thread is only used only when we are sending faster than the network
is able to handle.

Receiving in the NDB API is slightly faster to use from user threads
when only one thread is active.  It is 3-4% better response time in
this particular case. However as more and more threads are sending
data to the NDB data nodes the efficiency of using the NDB API
receive thread increases.

To avoid this problem we added a new thread in the NDB API in MySQL Cluster 7.6.
This is the wakeup thread. This thread only has one duty, this is to wakeup
other threads. We experimented with a number of different variants to see which
ensured that user threads are woken up as quickly as possible.

In the figure above we compare a normal sysbench OLTP RW experiment
comparing 7.5.9 with 7.6.6. As can be seen there is no difference until
we reach 32 connections. As we start to offload a subset of the wakeups
to the wakeup thread we improve performance of the application.

The throughput increases 5% due to this new feature, with even more
threads the performance drops slower such that we gain 15-20% more
performance at 512 connections.

The best performance is normally achieved by using the NDB API
receive thread and that this thread is locked to a specific CPU.
When starting the MySQL server one specifies these CPUs in the
configuration parameter ndb_recv_thread_cpu_mask. If the MySQL
Server uses several NDB cluster connections, the parameter
should specify one CPU per cluster connection.

The figures above shows the improvements when using one of the CPU
cores locked to handle the NDB API receive thread. Locking the receive
thread to a CPU adds another 5% to the total throughput and up to
20% more at high thread counts.

So what we have achieved with MySQL Cluster 7.6 is that we can increase
the throughput by at least 10% and performance at high thread counts
can increase by as much as 40%. All these numbers are still using the
TCP transporter. In a coming blog we will show how these numbers increase
even more when using the shared memory transporter. In addition we will
show how using the thread pool with NDB can even further increase stability
of high throughputs at high thread counts.

We are planning to upgrade MYSQL from 7.4 to 7.6
But MYSQL 7.4 is on Solarisx86 and we are planning to put 7.6 on RedHatLinux.
Question is can we have replication between these 2 cluster without any issues until cutover/switchover? if yes any process document or implementation document available? please forward us.