Impact of sharding on query performance in MySQL Cluster 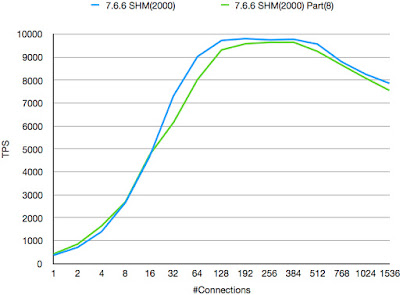 A new week of blogs about our development in MySQL Cluster 7.6.
After working a long time on a set of new developments, there is a lot
of things to describe. I will continue this week with discussing sharding
and NDB, a new cloud feature in 7.6 and provide some benchmark
results on restart performance in 7.6 compared to 7.5. I am also planning
a comparative analysis for a few more versions of NDB.

In the blog serie I have presented recently we have displayed
the performance impact of various new features in MySQL Cluster
7.5 and 7.6. All these benchmarks were executed with tables that
used 1 partition. The idea behind this is that to develop a
scalable application it is important to develop partition-aware
applications.

A partition-aware application will ensure that all partitions
except one is pruned away from the query. Thus they get the same
performance as a query on a single-partition table.

Now in this blog we analyse the difference on using 1 partition
per table and using 8 partitions per table.

The first difference is that the parallelism decreases the latency
of query execution at low concurrency. More partitions means a higher
speedup.

The second difference is that the data node will spend more CPU to
execute the query for multi-partition scans compared to single-partition
scans.

Most of the benchmarks I have shown are limited by the cluster connection
used. Thus we haven't focused so much on the CPU usage in data nodes.

Thus in the graph above the improvement of query speed is around 20% at
low concurrency. The performance difference for other concurrency levels
is small, the multi-partition scans uses more CPU. The multi-partition
scans is though a bit more variable in its throughput.

Tests where I focused more on data node performance showed around 10%
overhead for multi-partition scans compared to single-partition scans
in a similar setup.

An interesting observation is that although most of the applications
should be developed with partition-aware queries, those queries that
are not pruned to one partition will be automatically parallelised.

This is the advantage of the MySQL Cluster auto-sharded architecture.
In a sharded setup using any other DBMS it is necessary to ensure that
all queries are performed in only one shard since there are no automatic
queries over many shards. This means that partition-aware queries will
be ok to handle in only one data server, but the application will have to
calculate where this data server resides. Cross-shard queries have to be
automatically managed though, both sending queries in parallel to
many shards and merging the results from many shards.

With NDB all of this is automatic. If the query is partition-aware,
it will be automatically directed to the correct shard (node group
in NDB). If the query isn't partition-aware and thus a cross-shard
query, it is automatically parallelised. It is even possible to
push join queries down into the NDB data nodes to execute the
join queries using a parallel linked-join algorithm.

As we have shown in earlier blogs and will show even more in coming
blogs NDB using the Read Backup feature will ensure that read queries
are directed to a data node that is as local as possible to the MySQL
Server executing the query. This is true also for join queries being pushed
down to the NDB data nodes.
Posted by Mikael Ronstrom at 10:44 AM