Pointers to my presentations of MySQL 5.5 Scalability enhancements

Here is some pointers to my MySQL conference slides.
Here is the presentation on MySQL 5.5 Performance and
Scalability improvements
here

Here is the presentation on the MySQL 5.5 Performance
and Scalability benchmarks
here
Posted by Mikael Ronstrom at 11:46 PM 1 comment:

It contains the following InnoDB improvements:
Multiple Buffer Pool instances
- For example if the buffer pool is 8 GByte in size
the buffer pool can be split into 4 buffer pools
each containing 2 GBytes. Each page is mapped into
one and only one of these buffer pools.
Split Log_sys mutex
- We have ensured that the Log mutex and the buffer
pool mutex is more independent of each other. Also
the log_sys mutex is through this split less
contended.
Split out flush list from buffer pool mutex
Split Rollback Segment mutex into 128 instances
Separate Purge Thread from Master Thread
- Splitting out the purge thread from the master thread
is very important to ensure that performance is stable.
Extended Change buffering, now also Deletes and purges are
possible to buffer.

It contains the following MySQL Server improvements:
Split LOCK_open into
- MDL hash mutex
- MDL table lock mutex
- atomic variable refresh_version
- LOCK_open
We also removed some parts not needing mutex
protection from LOCK_open. All these mutexes are taken
independently of each other in almost all places.

In addition the InnoDB recovery has been improved by
decreasing recovery time by 10x.
Posted by Mikael Ronstrom at 5:30 PM 3 comments: 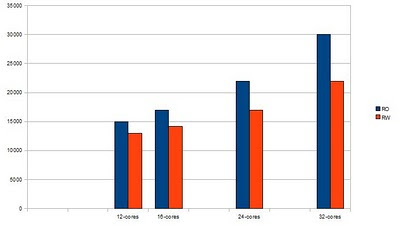 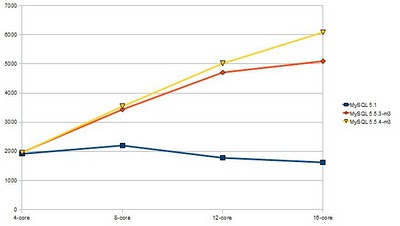