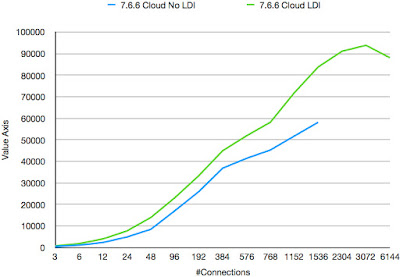 In previous blogs we have shown how MySQL Cluster can use the Read Backup
feature to improve performance when the MySQL Server and the NDB data
node are colocated.

There are two scenarios in a cloud setup where additional measures are
needed to ensure localized read accesses even when using the Read Backup
feature.

The first scenario is when data nodes and MySQL Servers are not colocated.
In this case by default we have no notion of closeness between nodes in
the cluster.

The second case is when we have multiple node groups and using colocated
data nodes and MySQL Server. In this case we have a notion of closeness
to the data in the node group we are colocated with, but not to other
node groups.

In a cloud setup the closeness is dependent on whether two nodes are in
the same availability domain (availability zone in Amazon/Google) or not.
In your own network other scenarios could exist.

In MySQL Cluster 7.6 we added a new feature where it is possible
to configure nodes to be contained in a certain location domain.
Nodes that are close to each other should be configured to be part of
the same location domain. Nodes belonging to different location domains
are always considered to be further away than the one with the same
location domain.

We use this feature to direct reads to a replica that is contained
in the same availability domain.

This provides a much better throughput for read queries in MySQL Cluster
when the data nodes and MySQL servers span multiple availability domains.

In the figure below we see the setup, each sysbench application is working
against one MySQL Server, both of these are located in the same availability
domain. The MySQL Server works against a set of 3 replicas in the NDB data
nodes. Each of those 3 replicas reside in a different availabilty domain. 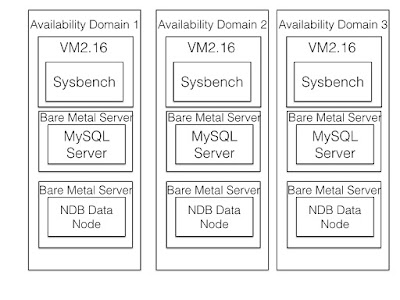 The graph above shows the difference between using location domain ids in
this setup compared to not using them. The lacking measurements is missing
simply because there wasn't enough time to complete this particular
benchmark, but the measurements show still the improvements possible and
the improvement is above 40%.

The Bare Metal Server used for data nodes was the DenseIO2 machines and
the MySQL Server used a bare metal server without any attached disks and
not even any block storage is needed in the MySQL Server instances. The
MySQL Servers in an NDB setup are more or stateless, all the required state
is available in the NDB data nodes. Thus it is quite ok to start up a MySQL
Server from scratch all the time. The exception is when the MySQL Server
is used for replicating to another cluster, in this case the binlog state is required
to be persistent on the MySQL Server.
Posted by Mikael Ronstrom at 8:49 AM