Benchmark Read Backup Feature of NDB in the Oracle Cloud 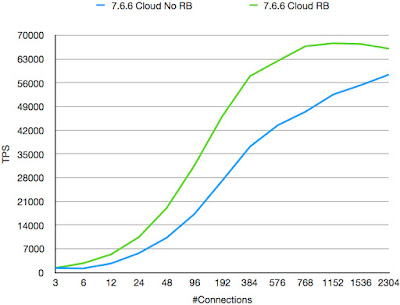 The previous blog demonstrated the improvements from using the Read Backup
feature in NDB in a tightly connected on premise installation. Now we will
show how the performance is impacted when running on the Oracle cloud.

The below figure shows the mapping of processes to cloud machines. In this
experiment we used the DenseIO2 Bare Metal Server as machines for the
combined data node, MySQL server and place to run the Sysbench application.
This machine has 52 CPU cores, it has a set of NVMe drives that provide a
very fast local storage for the NDB data nodes, this ensures very speedy
recovery and in addition provides an excellent hardware to place some columns
in the disk data parts of NDB. The machine has 768 GByte of memory and
51.2 TByte of NVMe drives. Thus providing  a highly available in-memory
storage of around 500 GByte and a few TBytes of disk data columns. 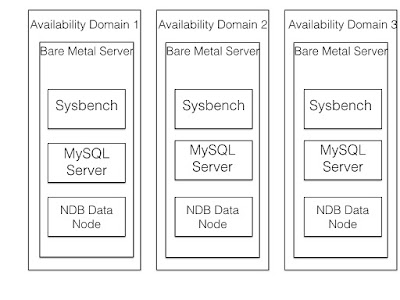 We used a standard Sysbench OLTP RO benchmark. This benchmark executes 16
SQL queries, 10 simple primary key lookups, 4 range scan queries that gets
100 rows from the database and finally a BEGIN and a COMMIT statement.
To scale the Sysbench benchmark each Sysbench instance uses different tables
and different data. In a real setting there would likely be a load balancer
that directs connections to an application in one of the availability
domains. From this application the idea is to handle most traffic internally
in the same availability domain. My benchmark scripts are ensuring that the
different sysbench programs are started in a synchronous manner.

Thus the main difference when Sysbench is replaced by a real application
is that a load balancer sits in front of the application. Load balancers
are provided as a service in the Oracle Cloud. One could also use a
MySQL Router between the application and the MySQL Server. The JDBC
driver can handle failover between MySQL Servers, this would avoid this
extra network jump. As we will see in the benchmarks, each network jump
makes it harder to get the optimal performance out of the setup and it
increases the latency of application responses.

The graph at the top of the blog shows the results when running all
nodes colocated in the same server. There is some variation on results
at low concurrency, but as the randomness of query placement goes away
the improvement of using the Read Backup feature is stable around 50%.
This improvement comes mostly from avoiding the latency when going over
to another availability domain for queries where the primary replica
is not in the same availability domain.

At extremely high concurrency the impact decreases, but at the same
time when running with more than 2k concurrent connections the
response time is a not so good anymore, at low concurrency each
transaction has a latency of around 2.5 milliseconds. At 2304
connections the latency has increased to 35 milliseconds. This is still
pretty good given that each transaction has 16 SQL queries to execute.

In the next benchmark we move the sysbench application to its own set
of machines. For the Sysbench application we used a VM2.16 instance
that has 16 CPU cores (thus 32 CPUs). The image below shows the
placement of the processes in the machines and availability domains
of the Oracle Cloud. 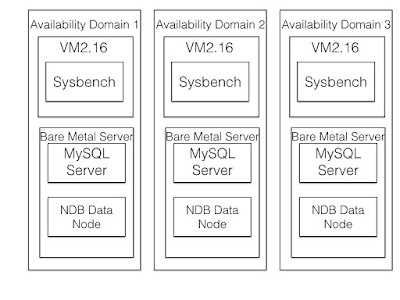 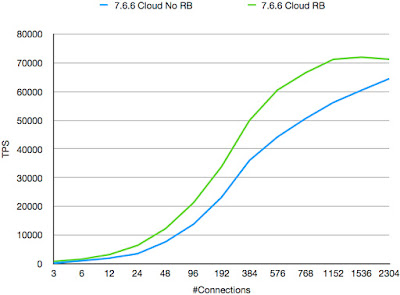 An interesting thing to note is that when running applications that use
a lot of network resources, it is important to configure the Linux networking
correctly. Interestingly I had some issues with this in the last benchmark
where the sysbench VMs could not deliver more than 40k TPS at first. After
searching around for the bottleneck I found it to be in the Linux interrupts
on the Sysbench VM. CPU 30 and 31 were completely busy. I was able to
issue a few Linux commands and immediately the performance jumped up to
70k transactions when the soft interrupt part was moved to CPU 0 through
CPU 15 using RPS in Linux. I described this in an earlier blog and also
my book on MySQL Cluster 7.5 contains a chapter discussing those configuration
options in Linux.