In the global memory manager we have 13 different memory regions as shown in the figure below: 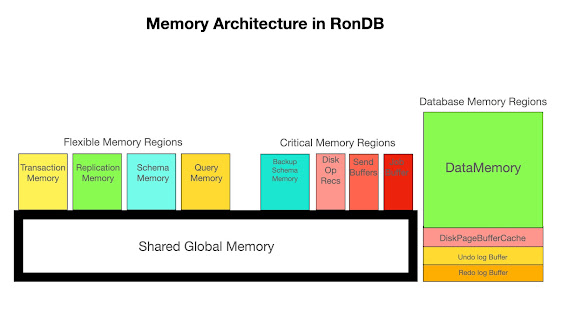 To handle these qualities of the regions we have priorities on each memory region, this priority can be affected by the amount of memory that the resource has allocated.

Fixed regions have a fixed size, this is used for database objects, the Redo log Buffer, the Undo log buffer, the DataMemory and the DiskPageBufferCache (the page cache for disk pages). There is code to ensure that we queue up when those resources are no longer available. DataMemory is a bit special and we will describe it separately below.

Critical regions are regions where a request to allocate memory would cause a crash. This relates to the job buffer which is used for internal messages inside a node, it also relates to send buffers which are used for messages to other nodes. DataMemory is a critical region during recovery, if we fail to allocate memory for database objects during recovery we would not be able to recover the database. Thus DataMemory is a critical region in the startup phase, but not during normal operation. DiskOperationRecords are also a critical resource since otherwise we cannot maintain the disk data columns. Finally we also treat BackupSchemaMemory as critical since not being able to perform a backup would make it very hard to manage RonDB.

Unlimited regions have no natural upper limit, thus as long as memory is available at the right priority level, the memory region can continue to grow. The regions in this category is BackupSchemaMemory, QueryMemory and SchemaTransactionMemory. QueryMemory is memory used to handle complex SQL queries such as large join queries. SchemaTransactionMemory can grow indefinitely, but the meta data operations try avoid growing too big.

Each region has a reserved space, a maximum space and a priority. In some cases a region can also have a limit where its priority is lowered.

4% of the shared global memory is only accessible to the highest priority regions plus half of the reserved space for job buffers and communication buffers.

The actual limits might change over time as we learn more about how to adapt the memory allocations.

The most important ones are DataMemory and DiskPageBufferMemory. Any row stored in memory and all indexes in RonDB are stored in the DataMemory. The DiskPageBufferMemorycontains the page cache for data stored on disk. To ensure that we can always handlerecovery, DataMemory is fixed in size and since recovery can sometimes grow the data size a bit. We don't allow the DataMemory to be filled beyond 95% in normal operation. In recovery it can use the full DataMemory size. Those extra 5% memory resources are also reserved for critical operations such as growing the cluster with more nodes and reorganising the data inside RonDB. The DiskPageBufferCache is fixed in size, operations towards the disk is queued by using DiskOperationRecords.

Critical regions which have higher priority to get memory compared to the rest of the regions. These are job buffers used for sending messages between modules inside a data node, send buffers used for sending messages between nodes in the cluster, the meta data required for handling backup operations and finally operation records to access disk data.

The remaining 4 regions we will go through in detail.

The first one is TransactionMemory. This memory region is used for all sorts of operations such as transaction records, scan records, key operation records and many more records used to handle the queries issued towards RonDB.

The second region in this category is SchemaMemory. This region contains a lot of meta data objects representing tables, fragments, fragment replicas, columns, and triggers. These are long-term objects that will be there long-term. Thus we want this region to be flexible in size, but we don't want it grow such that it diminishes the possibility to execute queries towards region. Thus we calculate a reserved part and allow this part to grow into at most 20% of the shared memory region in addition to its reserved region. This region cannot access the higher priority memory regions of the shared global memory.

Next region in this category is ReplicationMemory. These are memory structures used to represent replication towards other clusters supporting Global Replication. It can also be used to replicate changes from RonDB to other systems such as ElasticSearch. The memory in this region is of temporary nature with memory buffers used to store the changes that are being replicated. The meta data of the replication is stored in the SchemaMemory region.

Failure to allocate memory in this region lead to failed replication. Thus replication have to be set up again. This is a fairly critical error, but it is something that can be handled.

The final region in this category is QueryMemory. This memory has no reserved space, it can use the shared global lower priority regions. This memory is used to handle complex SQL queries. Failure to allocate memory in this region will lead to complex queries being aborted.

This blog presents the memory management architecture in RonDB that is currently in a branch called schema_mem_21102, this branch is intended for RonDB 21.10.2, but could also be postponed to RonDB 22.04. The main difference in RonDB 21.04 is that the SchemaMemory and ReplicationMemory are fixed in size and cannot use the shared global memory. The BackupSchemaMemory is also introduced in this branch. It was currently part of the TransactionMemory.

In the next blog on this topic I will discuss how one configures the automatic memory in RonDB.

Posted by Mikael Ronstrom at 1:05 PM