You can try it for free at trials

The MySQL thread pool is developed as a plugin and all the interfaces needed by the thread pool are part of the MySQL community server enabling anyone to develop their own version of the MySQL thread pool. As part of the development of the thread pool we did a lot of work to make it possible to deliver stand-alone plugins using the interfaces provided by the MySQL server. Most of these interfaces were available already in MySQL 5.1, but we extended them and made them more production ready as part of MySQL 5.5 development. So a plugin can easily define their own configuration variables and their own information schema tables and also easily use performance schema extensions. A plugin can also have its own set of tests.

Thus one can build a new plugin by adding a new directory in the plugin directory. What is needed is then the source code of the plugin, the tests of the plugin and finally a CMakeLists.txt-file to describe any special things needed by the build process. The public services published by the MySQL server is found in the include/mysql directory. There is currently six services published by the MySQL Server in 5.6. The my_snprintf, thd_alloc, thd_wait, thread_scheduler, my_plugin_log and the mysql_string services. One usually needs also to integrate a bit more of the MySQL server as the work on modularizing the MySQL server is a work in progress. To help other developers understand what private interfaces are used by a plugin some plugins also provide a plugin_name_private.h-file. There is such a file for the thread pool and for InnoDB currently.

Buying and reading the book MySQL 5.1 Plugin Development will be helpful if you want to develop a new MySQL server plugin. The MySQL documentation also have a chapter on extending MySQL at http://dev.mysql.com/doc/refman/5.6/en/extending-mysql.html 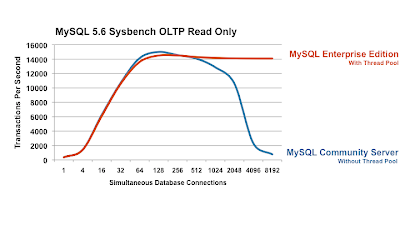 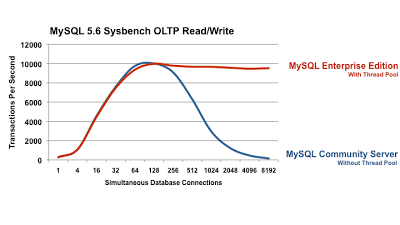 So let's step back and see in which cases the thread pool is useful. Most production servers are used at low loads most of the time. However many web servers have high load cases where a massive load is happening every now and then, this could be due to more users accessing the site, but it could also be due to changes of the web site that means that many web caches need to be refreshed. In those cases the MySQL Servers can all of a sudden see a burst of queries which means that the MySQL Server has to execute thousands of queries simultaneously for a short time.

Executing thousands of queries simultaneously is not a good use of the computer resources. The problem is that there is a high chance that we run out of memory in the machine and have to start using virtual memory not resident in memory. This will have a severe impact on the performance. Also switching between thousands of threads means a high cost on CPU cache usage since each time a thread is swapped in it has to build up the CPU caches again and this means more work for the CPUs. There is also other scalability issues within the MySQL server code that makes contention on certain hot-spots higher when many queries are executed concurrently.

So how does the thread pool go about resolving this problem to ensure that the MySQL Server always operate at optimum throughput? The first step is that when many concurrent queries arrive that these queries are to some extent serialised, so rather than executing all queries at once, we put the queries in a queue and execute them one by one. Obviously there needs to be some special handling of long-running queries to ensure that these queries don't block short queries for too long time. Also some special handling is needed of queries that block for some reason such as on a row lock, a disk IO or other wait event.

The thread pool divides connections into thread groups, the number of thread groups is configurable, in really big machines it can payoff to have as many as up to 60 thread groups using MySQL 5.6. Each thread group normally executes either 0 or 1 query. Only in the case of blocked queries and long-running queries does the thread group execute more than 1 query for a short time.

The above description serves to avoid problems with swapping when using too much memory and also fixes the issue with too much context switches that taxes the CPUs.

There is however still one problem that can cause issues and this is the fact that transactions hold resources also when no query is running at the moment. To solve this problem the thread pool puts a higher priority on connections that have already started a transaction. Started transactions can hold locks on rows that block other transactions from proceeding, they are part of sensitive hot-spot protected regions that can slow down the execution of all other transactions. So giving started transactions a higher priority makes a lot of sense. Indeed this feature means that we can sustain 97% of the optimum throughput even in the context of 8192 concurrent queries running, without this feature we would not be able to handle more than around 70% of the optimum throughput at such high concurrency.

One way of describing the thread pool is as an insurance. If you run without the thread pool your system will run just fine for most of the time. But in the event of spike loads where the system is taking a severe hit the thread pool serves as a protection measure to ensure that the system continues to deliver optimum throughput also in the context of massive amounts of incoming queries.